Mrs. Brexel had told me that she does hypnosis with animals. I personally had good experiences with hypnosis, but had never heard before that something like this also exists with animals.

My animal was a lovely, but very bitchy mare. I myself own a stud with a riding school.

The mare’s biggest problem was that you could hardly touch her on the right side. She always associated it with extreme stress, winced, constantly evaded … it was always something.
This problem was already prominent when she came to me.
It was a constant struggle to clean her and combing her mane was pure horror for her. And the bad thing was, I knew it was always particularly stressful for her.
And for me it always meant stress.
In addition, I had the problem that some of the students did not want to clean the mare and make it ready for the stable after the riding lesson. Especially the young girls.
Then it was always up to me.
It was a problem that affected many areas in the operation of a riding school.

With the prospect of being able to change everything, I was very grateful that I knew Ms. Brexel.

During the first hypnosis, my mare shared why she had the problem. It was an experienced trauma.
Ms. Brexel healed the trauma and my mare told how I can help her now.
Since hypnosis is a process, I learned that she had to get used to a new life without these deep-seated fears. Because she doesn’t even know what it’s like to be touched or combed without fear.
When I asked what I can do for you, I got the answer:
! I shall be patient and understanding. And just to keep talking to her like I always do. She likes it when I tell her about my day while ‘ grooming ‘!  WOW.
That was a moment that really touched me.

With so much more understanding and love I did everything what she had told in the coming days and day by day it got better and better.

Everything was consolidated even more during the second hypnosis session and today everyone can touch, comb, clean and get her ready for the stable without stress.
And with that, all the other little problems went away too. Because my mare is now so calm and relaxed that my riding students now look after the animal with enthusiasm. My mare is clearly enjoying this and I have gained more than just peace and time.
Thank you Ms. Brexel for making such a wonderful change.
T. Parusel, Rancho La Ofra, Spain 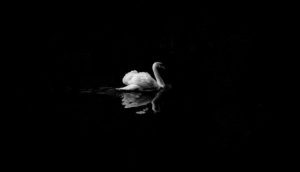 I came to Mrs. Brexel because of one of my dogs, a terrier from the animal shelter. He came to me because he couldn’t be touched by other people and was very scared and suspicious of others. In total I still have 4 dogs and they all lived on the street. The terrier was the last to join. If the other dogs wanted to come to me, he became aggressive towards them and protected and defended me. During the hypnosis it was talked about why he was doing it and now he has completely stopped doing it. This animal hypnosis is a great thing. You feel very connected to your animal. It was a great experience for me to be so connected with my animals and I was able to help them a lot. Thank you Ms. Brexel. Sigrun P. Germany

I have a super cute grey cat girl, which was really screwed up when she came to me. She was very difficult to touch and then only by me. She was constantly hiding in the farthest and darkest corners. I felt so sorry for her.
When my husband wanted to touch her, she crawled deeper and deeper and her eyes shone with panic.
She came out to eat and then I could approach slowly and touch her briefly. In my attempts to take her in my arms, she showed great fear and meowed pitifully and scratched my forearm while lowering her and she was quickly gone.
I thought that would go away after the time. But no, it didn’t.
When my husband left the house, she would sometimes come out and was around me in a distance, but as soon as he or anyone else entered the house, she was gone again.  In general she was terribly scared, always jumpy and never seemed to be able to relax, as if she had to be constantly on the lookout for something or someone.
It was really no life for a cat and no harmonious coexistence either.
Ms. Brexel came as a recommendation and I got in touch with her with the need that she could help me. Since I live in Thailand, I had the healing sessions done with a surrogate that Ms. Brexel made available.
During the healing sessions I found out what had happened to my cat girl, I found out about her resulting fears and I was able to understand her panic perfectly.
That she was picked up and dropped by someone as a baby!
That she was before with a man for a very short time and he kicked her and that hurt!

The astonishing thing was, that the cat was only about 6 months old when it came to me.

I am so grateful that Mrs. Brexel helped my sweetheart and you should see her today! She is a big cuddler and she sleeps in the bed every night!
That’s how it should be.